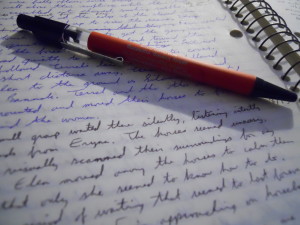 My Family History class recently compiled a small anthology of our writings. We were giddy with excitement upon seeing the final product entitled “Our Memories.” I was slightly cross-eyed from editing this slim volume, but it was well worth it; the stories are priceless.

A young girl’s passage to America and adulthood, an idyllic Mexican vacation gone wrong, mopping the front porch to help mom, remembering a favorite cat. Now these stories are immortalized, the poems and photos will be enjoyed for many years to come.

In Letters to An American Lady, C.S. Lewis reveals much of his character in his one-sided correspondence with said lady. I do not suppose that he expected these letters to ever be published, yet they were. Remembering that Lewis hated writing, yet he faithfully responded to all who wrote him, one passage becomes all the more poignant. Dated 15 July 1960 it reads: “Dear Mary, I’ve just got your letter of the 12th. Joy{his wife} died on the 13th. I can’t describe the apparent unreality of my life since then. She received absolution and died at peace with God. I will try to write again when I have more command of myself. I’m like a sleep-walker at the moment. God bless. Yours Jack.”

It’s hard to capture the full impact of such a letter written at such a time. Lewis had once described the happy life as “that a man would have almost no mail and never dread the postman’s knock.” In spite of his letter-writing antipathy, C.S. Lewis believed that taking time to encourage other Christians was an act of humility (using one’s talents in such a seemingly insignificant way), and as much a work of the Holy Spirit as producing a book.

Small glimpses into Lewis’ life are illuminated in his letters, things such as his fear of heights, love of cats and dogs, doing his daily chores, and his shared dread of poverty. The posthumous revelation that Lewis had given away 2/3 of his income is all the more impressive when his fear has been disclosed in his letters. So much more could be said on this topic, but suffice it to say that I am convicted by this example of faithfulness by one of my favorite authors, indeed, one of my favorite people.

As I was exhorted last night by a brother to take time and discipline to edify and encourage the brothers and sisters through writing, do I have any acceptable reason not to do so? After all, C.S. Lewis responded faithfully two days after his wife’s death. No excuses!